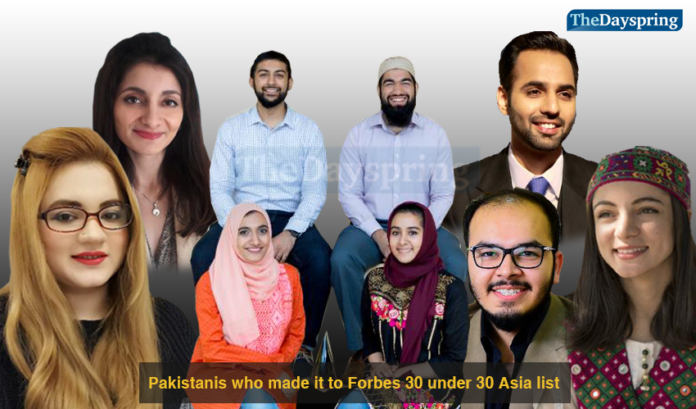 Forbes is an American business magazine published bi-weekly with millions of online readerships worldwide. It has recently published its annual series of highlighting stories of young innovators and entrepreneurs: 30 Under 30 Asia list. As always Pakistanis also made it to the pages of the magazine. Forbes has added nine entrepreneurs and innovators from Pakistan for its 30 Under 30 Asia list 2019.

The list showcases Asia’s next generation of leaders. “From innovating in technology and disrupting age-old industries to demonstrating immense talent and dominating the world stage this group of young stars shines in more ways than one,” according to Forbes.

A total of nine Pakistanis have been featured on the list.

Zainab is the founder of Pakistan Society for Green Energy.

The company was formed in 2013 and since then it has successfully developed biofuel from waste tissue paper, and introduced Camelina Sativa, a drought-resistant plant that can be made into bio-diesel, according to Forbes.

She has led research at organisations such as the World Bank, the US Army Corps of Engineers, and the UC Davis Center for Watershed Sciences on climate-smart irrigation, flood risk reduction, and river basin planning.

Karishma Ali is the president of Chitral Womens Sports Club.

She is currently the only woman football player from her hometown. She has represented Pakistan at the Jubilee Games in Dubai, and her team was the first women’s team from Pakistan to participate in the AFL International Cup.

Ahmed Rauf Essa is the co-founder of Telemart, one of the largest e-commerce platforms in Pakistan. The company also has an extensive wholesale channel which caters to more than 500 dealers online, and is an end-to-end solutions provider for major firms such as P&G, Lucky Cement, and Ufone.

Zain Ashraf is the founder of Seed Out, Pakistan’s first crowdfunding platform that works to end poverty by establishing entrepreneurs with interest-free micro-financing.

Hanaa Lakhani, Hasan Usmani, Gia Farooqi and Moneeb Mian are the co-founders of Roshni Rides. It is a women’s friendly carpooling platform for commuters based in Pakistan.