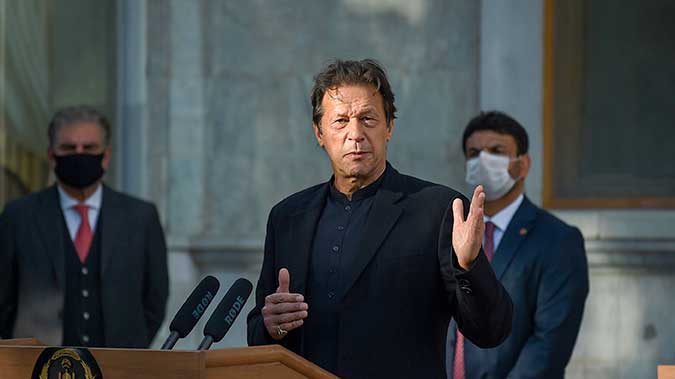 Pakistan’s embattled Prime Minister Imran Khan was deposed as the leader of a country after a parliamentary vote of no confidence, with opponents blaming him for the country’s deteriorating economy and failing to keep political promises.

These blame games between the politicians are not surprising as long as it benefits them; however, the current situation in Pakistan is very frustrating because these politicians try to maintain their power by displaying egoistic behavior to each other without making any fine effort for the country; instead, they are busy attacking each other with their words or showing the negative side of their stories.

The United States is Pakistan’s largest export market and one of the country’s largest sources of foreign direct investment. The US government is supporting it by funding reverse trade delegations, business conferences, technical aid, and corporate outreach. The US-Pakistan trade relationship was strengthening until Imran Khan made the blunder of saying “hum kisi k ghulam nhi hen.” While that statement was correct in some cases, but how can we as a poor country not be dependent on a country like the United States, which provided all of the funding to help us overcome our economic crisis?

Yes, we are completely reliant on the United States since it provides funding to help our country become more secure and economically powerful. However, how come these funds disappear so quickly and Pakistan becomes economically stagnant without making any effort? How can we discuss the economy without mentioning corruption? Despite the fact that it is unrelated to the economy. However, this is one of the key issues indirectly. The country continues to struggle with an increase financial crisis and persistent trade imbalance.

Pakistan is still dealing with a variety of diverse conflicts. A restricted image of Pakistan’s national identity had encouraged rising extremism, endangering the country’s prospects for social cohesiveness and stability. Because official institutions have consistently failed to provide nonviolent means of resolving concerns, groups have turned to violence as an acceptable option.

Religious extremism and intolerance have become widespread in our culture, particularly among the youth. Extremism has gotten worse during the previous two decades. The state apparatus has failed to fight and prevent fanaticism.

Throughout the country, extremists have slain innocent individuals, officials, parliamentarians, and students in a number of horrific acts. Unfortunately, we live in a hopeless country where a small group of zealots decide whether you live or die. According to a recent human development report, nearly half of young people do not want to have amicable relations with people of different religions.

Pakistan must pursue its diplomatic goals in an uncertain global and regional situation marked by various critical elements. Among them include rising East-West tensions, large countries’ growing focus with internal problems, ongoing trade and technology fights, a fraying rules-based international order, and movements by regional and other powers to rewrite the rules of the game in their neighborhood.

Understanding the dynamics of a rapidly changing world is crucial, particularly because unilateral decisions by big countries and populist leaders, which define their foreign policy, have ramifications for Pakistan’s diplomacy. As it builds its foreign policy approach, Pakistan must match its aspirations to its diplomatic resources and capital. No strategy will succeed unless the objectives and means are aligned.

Pakistan’s relations with China will continue to take precedence. While long-standing strategic connections have gained a strong economic dimension, relations must be maintained by continued high-level interaction and consultation. CPEC is on pace; yet, timely and smooth progress is critical in reinforcing Beijing’s interest in economically and strategically bolstering Pakistan. On crucial topics, close collaboration with Beijing is essential.

Pakistan wishes to strengthen ties with the United States. However, Washington’s prolonged fight with Beijing, which American officials claim has a confrontational character while China accuses the US of having a cold war mindset, will surely harm relations. Islamabad is trying to stay out of this major power struggle. But saying it is easier than doing it. As long as US-China relations are shaky, Pakistan’s efforts to repair ties with the US will be hampered, especially since limiting China is a primary American objective.

Pakistan ensured that the US met all of its regional strategic objectives. Since keeping its distance from Pakistan, the United States has experienced crisis after crisis. Pakistan’s significance is fully understood by the US deep state.

For the time being, the United States believes that the departure from Afghanistan has reduced Pakistan’s importance. For nearly two decades, Afghanistan was the focal point of their often tumultuous relationship, which was distinguished by both cooperation and mistrust. As Pakistan strives to restart its relationship with the United States, the task is to establish a new foundation for a relationship that is mostly devoid of significant bilateral content.

When balancing relations with Saudi Arabia and Iran, Pakistan should consider how to take advantage of prospective softening of relations between the long-time adversaries — of which there are some preliminary evidence — With Crown Prince Mohammed bin Salman aiming to use his country’s economic might to boost its diplomatic clout by making large international investments, Pakistan could exploit its political ties with Riyadh to attract Saudi investment through a well-coordinated strategy. Relations with Iran should be improved as well, with strong engagement on regional issues, particularly Afghanistan.

To protect its national interests and ambitions in a more multipolar world, Pakistan must step up its diplomatic efforts by reaching out to other major countries and entities beyond governments. Export growth, import substitution, and poverty reduction are all important areas of national interest.

The author can be reached at [email protected]