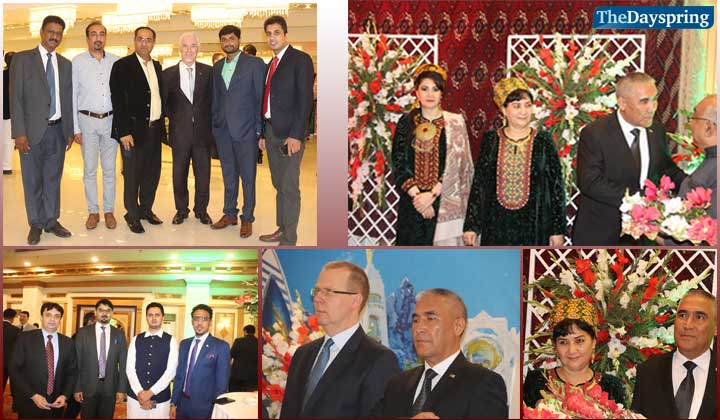 Dean of the diplomatic corps, Turkmenistan’s Ambassador Atadjan Molamov and Mrs. Gozel Movlamova, with embassy staff, hosted a grand reception at Marriott Hotel in Islamabad to mark Turkmenistan’s Independence Day. The event took place in advance of the actual date, 27 October, when Turkmenistan in 1991 gained independence from decades with the Soviet Union. Today, they cooperate within Commonwealth of Independent States (CIS).

At the reception in Islamabad, Ambassador Movlamov was standing on stage, listening to his country’s and Pakistan’s national anthems with the Russian Ambassador Danila Ganich on one side and the chief guest, Federal Minister for Religious Affairs and Inter-faith Harmony, Nur-Ul-Haq Qadri and Minister for Aviation Ghulam Sarwar Khan on the other side.

The event was particularly well attended with guests from all walks of life, young and old. Ambassador Movlamov is a highly respected diplomat and a particularly friendly and youthful envoy, in spite of also being the Dean of the Diplomatic Corps, a duty bestowed upon the envoy who has served longest in the country.

The dinner included Pakistani and Turkmen dishes, served in the hotel’s dining area, adjacent to the reception hall and at the pool side in the pleasant evening weather. “It was a bit fresh but still more than warm enough”, said a European diplomat. “In Europe, colder weather has already begun so I am indeed glad to be in Pakistan”, she said.

A group of young women guests joked about the UK Prince William and Princess Kate being missed from the event. “But then they have gone to Gilgit, and cannot be in two places at the same time – not even royals can do that”, one of them said.