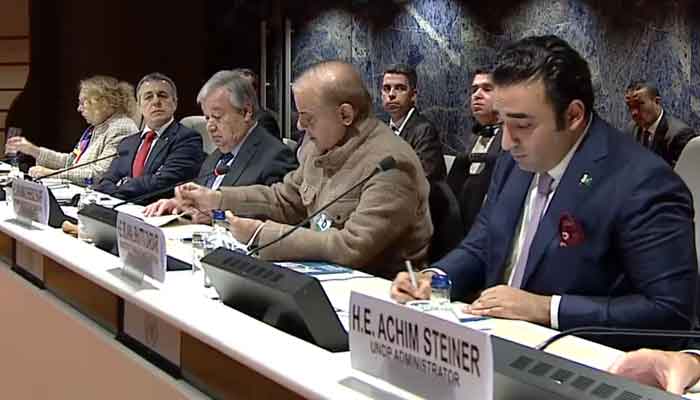 The Donor Conference in Geneva to help the Pakistan flood victims has been encouraging in the sense that the world including Islamic Development Bank, Asian Development Bank, European Union, World Bank, France and Germany, have pledged a total of 10.57 billion dollars.

With the efforts of Prime Minister Shehbaz Sharif, Foreign Minister Bilawal Bhutto Zardari and Pakistan’s diplomatic machinery, this amount will be provided to Pakistan in phases in the next three to four years.

United Nations Secretary General Antonio Guterres informed the participants about the flood disasters in Pakistan and said that no country has the ability to deal with natural disasters alone. The floods in Pakistan in August 2012 killed 1700 people.
The rehabilitation work for people in the affected areas could not start owing to lack of funds. In the donor conference, Pakistan’s appeal was listened to with attention.

Experts are saying the funds promised in the Geneva conference are not grants but loans. Similarly, Pakistan has promised that half of the expenses incurred on the rehabilitation work will be paid from the national exchequer.
The federal government has decided to allocate 248 billion for the rehabilitation of flood-affected areas in Sindh and Balochistan.

Funds from the donor conference will be spent on natural resource restoration, agriculture, livestock, fisheries and flood prevention projects. The rehabilitation work will be supervised by the Federal Minister for Planning and the Chief Minister of the concerned province. Development projects in Khyber-Pakhtunkhwa and Gilgit-Baltistan will be done with eighty-seven million Euros from the European Union.

As per the government record, there are concerns that these funds will be used keeping political interests, favoring constituencies and corruption. These concerns are not unfounded. In 2005, Pakistan witnessed a terrible earthquake. Over a hundred thousand people died the whole world came with aid and funds and it was firstly IRA which was later upgraded to National Disaster Management Authority. A significant number of earthquake victims still complain about the lack of restoration work till date. The year 2010 till 2015 there were floods almost every year. A comprehensive inquiry was conducted into the causes of the disastrous floods in the first year and with the aim securing the future this inquiry has not seen the daylight till now.

It is on record that influential politicians drowned the poor people to save their agriculture land comprising thousands of acres.

This time flood caused havoc in the entire country. It is a fact development projects are organized from the perspective of political interests and details are now there with Punjab being deprived of rehabilitation projects and KP has complained that the Center as in the Federal government is not giving their share of the funds received