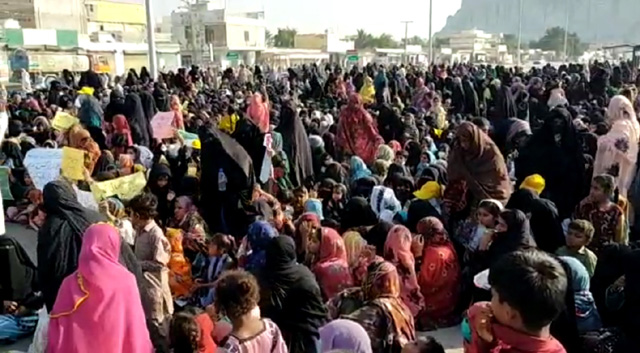 Thousands of people including women and children staged protests for almost one month at Gwadar chanting slogans for their rights, which turned into a movement under the title ‘Gwadar Ko Haq Do’.

Their cries were finally heard and Prime Minister Imran Khan’s assurance that their grievances will be looked into has made the tense situation a bit calm.

Gwadar has now assumed the role of the lifeline of Pakistan and with each passing day its importance increases manifolds.
Pakistan and China have joined hands in developing the area, which is believed to turn the fortune for Pakistan economically and strategically.

PM Khan has taken notice of the sit-ins of fishermen who have put in 19 demands with the foremost one deals with their livelihood.
Gwadar has become a center of both foreign and local investment. The local fishermen have been hard-pressed and they faced many problems with foremost being the availability of clean drinking water.

The presence of commercial fishing vessels has also been the reason for the protest as the areas have not been marked and the activity has ruined fishing breeding grounds owing to nets that destroy their habitat.

Prime Minister has given the task to Chief Minister Abdul Quddus Bizenjo to have a dialogue with the protestors and redress their grievances.

The sad part is that thousands marched the roads chanting slogans but the local government failed to resolve their legitimate demands and it was none other than social media which showed women and children chanting slogans for their rights made PM Khan to look into their plight.

The region due to its strategic importance has also become an area of interest for the non-state actors and government for curbing the anti-state elements has placed measures, which have been causing great concern for the locals.

Gwadar also due to its significance has also earned its name as holding the largest protest rallies in the history of Balochistan.
Maulana Hidayatullah, head of Haq Do Tehreek, who leads the protestors has welcomed the announcement of the Prime Minister and hoped that the promises would be implemented soon as per the wishes of the locals.

A number of issues can be resolved amicably if the district administration listens to the protestors as enforcing their will has resulted in international attention besides irking the people who feel threatened by the high-handedness of the local government which refused to settle the disputes that have existed for long.

Not all is lost, the government should formulate a policy and give a chance to the locals who feel alienated owing to the developmental projects in which they have been denied any role.