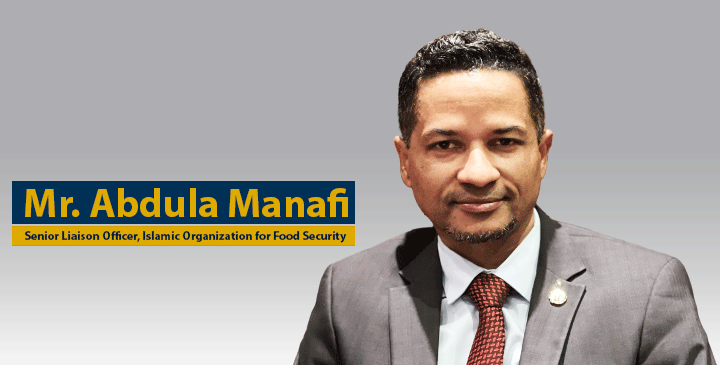 Understanding the dire need for food security and biodiversity, The Dayspring got a chance to interview Mr. Abdula Manafi Mutualo, Senior Liaison Officer “Islamic Organization for Food Security” (IOFS) who was in Islamabad, Pakistan in mid-September 2022 to attend the “Youth Forum on Biotechnology”.

The name “Islamic Organization for Food Security” (IOFS) and the Statute of this specialized institution of the OIC were formulated at the Intergovernmental Meeting of Experts of the OIC Member States on June 11-12, 2013.

IOFS is an international organization of OIC family that was established by statutory mandate in December 2013 and started its function in 2017 after the ratification of member states. According to Mr. Abdula Manafi, the organization got a better attraction when the current Director General, Mr. Yerlan Baidaulet, took over as DG in May 2019. At present, IOFS is comprised of 37 Member States out of 57 that are Members to the OIC, 14 of which ratified the Statute.

Telling about the objectives of IOFS, Abdula Manafi said that the organization has various intents – all lying under the subject of food security and, to some extent, agricultural development.  From providing of technical expertise, monitoring the state of food security in member states, and resource mobilization is what IOFS doing to uplift human lives.

Manafi tells that IOFS is following its recently developed ten-year Strategic Vision 2031 further divided into 5 pillars and it was adopted by the 4th General Assembly held in September 2021. The five pillars include Governance Enablement, Food Crises Response, Capacity Building, Industrial Development, and Recourse mobilization and within that we have sixteen programs that cover different aspects of food security, tells Manafi.

IOFS provides special assistance in devising policies to the Member States according to their priorities in the field of food security and agricultural development, Manafi added. For instance, for Mozambique, the interest is to increase commercial agriculture, which is why an International Agriculture Business Forum is expected to be held in Maputo, Mozambique, on 27 October 2022 which will provide an international platform for the people of IOFS Member States to learn and grab investment opportunities in that African country.

Youth forum on biotechnology in Pakistan

When asked about takeaways and learning from the three-day event that Abdula Manafi attended in Islamabad titled “Kazakhstan-Pakistan-Turkiye Youth Forum on Biotechnology”, he said that he is of the view that Muslim majority countries have the right knowledge and technology in the ambit of food security, but the only thing is that we all should trust each other, look for better synergies within the OIC system rather than searching solutions outside the same. Mentioning about a Pakistan based ‘Bondh E Shams’ or ‘Droplets from the Sun’ project that is an innovative, affordable, scalable solar-powered all-in-one water pump and filtration system, called the OASIS Box, Manafi stated that there are number of innovative methods developed by Muslim youth that should be adopted by all OIC member states instead of looking for costly products built outside of the Muslim world. “This device build by Pakistani young entrepreneurs can feed an entire village with this box and it costs around 5000 dollars” Manafi said. But because this device is developed in Pakistan people are reluctant to pay $ 5000 because of lack of trust on local devices, if the same device is built in some western country people are ready to pay $ 35000 Manafi told quoting CEO of ‘Bondh E Shams’, Hamza Faruk.

Message for the Muslim Youth

Abdula Manafi stressed the Muslim world to build trust in each other in order to implement cost-effective technologies to achieve sustainable growth.

Answering a question about how the Muslim world and specifically Muslim youth can prosper, He said that to achieve our lost glory we have to follow the teachings of Islam because it’s not only a religion it’s a complete code of life.

Abdula Manafi also stressed the need to improve the standard of education in the Muslim world and he suggested that this can only be done by investing more in the education sector towards providing equal opportunities for girls and boys.