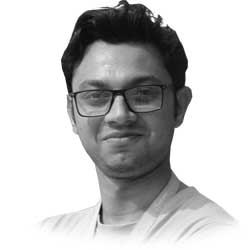 From the beginning of mankind, humans have mastered at turning the circumstances in their service. When they were at war with animals in the Stone Age, they devised the tools to hunt them; when they couldn’t find many animals, they plowed the lands; and when they wanted to ride, they tamed those animals. In every age of each era, they championed at being a superior class that preserved the skill to withstand the burden of stress.

Women, in Pakistan, if they want to move forward, have to halt these stereotypical frailty and delicacy. They should stop being exploited by these designed concepts of their parents, husbands or anyone who tries to subjugate them

One such skill, which has been there at the tip of the iceberg, is adulation. It helped colonists rule the world. Russell points out in one of his essays that Irish were extolled by English for their special charm and mystical insight, while Italians for their romantic poetry, and same goes for other nations. But the irony is when those nations revolted and liberated themselves from the British, they were stopped being appraised.

It is simple technique, if you want to win a person, feed him with something that he can linger on, and you can have him. Children at their young age are considered the celestial bodies which are the epitome of innocence. But if the same child, after a couple of years learns few bad words from his surroundings, he is scolded and admonished. People start disliking the children who retort when ridiculed.

For years now, women have been viewed as the mystical creatures who in our ethos are regarded with the titles of delicacy and frailty. In homes, they are treated as a seraph by majority of parents, who are never allowed to do any heavy work, as for them it could hurt the little miss. But at the same time, in Pakistan, especially, the heavy burden of purported rectitude of the family is attributed to these ostensibly fragile creatures. In other words if a girl does something against the mores, it brings an ill name to the whole family. According to sources, the Former Prime Minister of Pakistan, Zulfiqar Ali Bhutto, while bidding farewell to his eldest daughter, former Prime Minister, Benazir Bhutto, for Oxford, handed her a white shawl as a symbol of integrity which should remain unstained.

This precedent has led to the catastrophic implications upon the mindset of the majority of the females in Pakistan. They are cajoled by all this fragility and delicacy and don’t outgrow their fears or come out of their comfort zones. Majority of the females are nurtured in such way they that prefer to be a subordinate to their male counterparts, which ultimately strengthens the argument of Mrs. Khan.

There is a major difference between the lifestyle of young boys and girls in the country. While boys are allowed to do the majority of the work outside, which in our culture is a part of their training for leading a family, women are kept away from this. In some families, a girl cannot travel on her own, even if she has to go to a neighboring house. The girls living in the hostels have a specific time, after which they cannot go outside, even in case of emergency. They are called daily by their parents, who let them know of her curbs in society with a layer of butter.

But under some circumstances, if a girl outgrows these barriers of the society, she is considered an ill-mannered woman who is remembered with the titles of harlot or witch or even worse. Qandeel Baloch, when challenged the society and exposed the evil face of the people, was killed in the name of honor by her brother. Thousands of girls are mutilated in the name of honor in Pakistan every year. According to the stats of, “Honor Based Violence Awareness Network,” one-fifth of the killings based on honor around the globe occur in Pakistan.

For us, human, everything which obliterates or threats to obliterates our commands or traditions, becomes nefarious. It happened with different nations, it happens with children, it is happening with the women and it is the bottom line of our day to day dealings. An employee is in good books of his owner, only until he submits to the employer. Unless he feeds on their food or takes shelters under their shadow, he is considered loyal, staunch and trustworthy. The day these people start breaking the stereotypes and start to see the world from a different eye or even start to have their own opinion they are left to be cursed in the purgatory.

Women, in Pakistan, if they want to move forward, have to halt these stereotypical frailty and delicacy. They should stop being exploited by these designed concepts of their parents, husbands or anyone who tries to subjugate them. They need to break the shackles of this flattery. As for us who claim the equality of our daughters, wives, and mothers; the day we let go of the float some theory about the women being the honor of the family, would be the day we exalt them to our standards.

The writer is a Geologist and can be reached at [email protected], You can find more about him via arifeenism.com