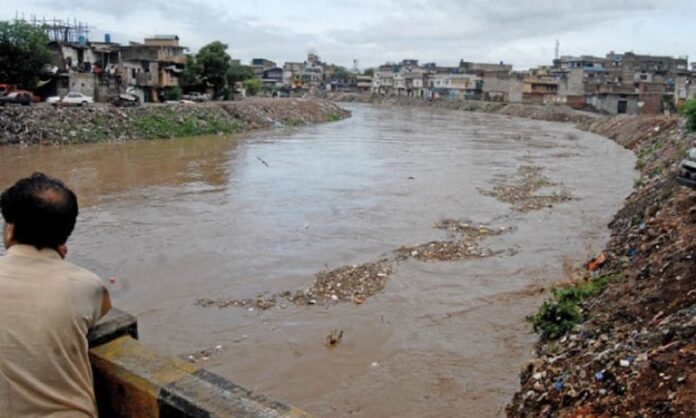 Leh Nullah a winding stream, which is filled with waste and a stench that can be detected from far a distance, is now fishing spot for poor people who fish for left over discards.

Plodding though filthy water, finding something of a value, is the man’s mission, to make his living for the day and this is repeated every day. To live off the scraps that are deemed worthy by people who deal in trash also states how things have been over the decades.

‘Land of the pure’ has abundance of everything but has wrong people at the wrong places and it is time for once the ‘myth’ government jobs have a price should be unfolded. How many jobs are lying vacant in the government sector and why they are not filled is the question that needs an answer. The other suggestion from the jobless is that there should be a ‘rate list’ for every government job and those who can afford it should get the job which promises ‘nothing much to do but promises a lifetime of unlimited perks.

How many of the corrupt government servants have been made an example or all these vacant jobs had corrupt officials and they were removed from service.

The man in picture is able bodied person and is forced to look in garbage to make ends meet. This is all due to things that have never been looked into by the policy makers who make lofty plans for the public but not all the plans encompass the public.

The poverty stricken nation that has over one third living below poverty line and many a millions who are without any identification cards as nothing is free and these people don’t have the money to make ID’s as the money for food comes first and card comes way after.

This sad state of affairs is deplorable and leaves a person in a bad taste as all the programmes for the poor somehow doesn’t encompass these unfortunate people.

Where should they go? What should they do? This question and man is picture is the question for the policy makers to find relief as what they plan leaves many of them all over the country and they are not one or two but in many a thousands.

Seeing is believing; picture tells it all

Shanty towns and their fate stays the same

No rest for the weary

Carers who can save animal lives in zoos