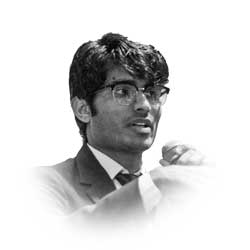 Despite being the welfare state, Pakistan is among the world’s most horrible countries when it comes to the freedom of religion. It has been listed among the “Countries of Particular Concern” in annual report of United States Commission on International Religious Freedom (USCIRF). Religious freedom has always been the matter of critical concern since country’s inception, although founder of country Muhammad Ali Jinnah left no stone untouched in believing in citizenship and equality of all citizens. But the legacy he left was undermined by starting a movement against “Ahmadiya Muslim Community” in the 1950s, which, later in mid-1970s, paved the way for the second amendment in the constitution of Pakistan 1973.

Need for updating the curriculum to modern scientific-based principles and mind of the people, is equally important so that we can create a tolerant and inclusive society.

This was almost the start of Islamization of laws, although it was not the state’s concern to decide about the religion of the subjects or a community. Once the state affirms in equal citizenship, it must treat the citizens impartially, endorsed in article 25 of the Constitution. It was not done yet with the most vulnerable community, the martial law regime came in full swing in the 1980s by putting more restrictions on the community under section 298-B and 298-C of the Pakistan Penal Code (PPC), curtailing more religious rights of “Ahmadiya”. It would not amaze the readers by knowing that an “Ahmadiya” can be imprisoned up to three years for representing himself as a Muslim or for preaching his religion. Not to wonder we have article 20 in the constitution, which gives right to propagate, profess and practise the religion. Yet another development in this process was the exclusion of “Ahmadiya” from National Minority Commission earlier this year, even denying their existent as a minority. Some experts are of the view that: it is not even a violation of article 18 of ICCPR but it falls in the persecution of Particular Community.

Among principles of democracy, one is equal citizenship. Yet we see article 41 (2) which doesn’t allow any religious community, except Muslims, to contest for presidency. Similarly, article 91 (3) restricts all the communities to be prime minister but Muslims. Both these articles stand against article 27, which calls for no discrimination on the bases of religion. When, what it calls itself, an Islamic State doesn’t treat its subject equal, it finds no justification for questioning the persecution Muslims in India, Myanmar, Palestine and France. No moral justification can be brought when a state itself discriminates on the bases of religion. Let alone Atif Mian’s issue take a side, upon his removal from Economic Advisory Council because of his faith.

Freedom to leave, adopt or change religion is a widely accepted human and natural right of human being. Pakistan witnesses, on average, one thousand cases of “forced religious conversion” annually, mostly in the southern part of the country with mostly religious clerics, apparently using seminaries, are given this task. Most of these cases are proved in favor of victim’s family in the court of law. Recent case of Mehek Kumari, a 16 years old Hindu was abducted from home, later, converted. she confessed in the court that she no more wants to live with her husband, who had done all the measures to get her to one of seminaries in Sindh, despite knowing that she was underage. Although underage marriage is punishable crime under section 3 of “child marriage restraint act 2014” but culprits go untouched because of support from local religious clerics and seminaries. Even the religion, they represent, doesn’t allow them to do so under the verse of Quran: “There is no compulsion in religion”.

An organized and peaceful religion must be open to criticism and critical debate, but this has witnessed otherwise. It is considered blasphemy, or it leads to society’s outrageous feeling. Not because the society is originally so much intolerant or bigot but the curriculum and thinking for religion we have set, has affects much loss resulting in authoritarian approach for the society and critical policy makers and dissents. 295-C (PPC) enacted under martial law regime in 1980s, cannot be accepted in a democratic society of twenty first century. Neither human rights principles were considered, nor it was led to debate on reason and let the dissent speak, showing how bigotry had enriched our pluralistic and tolerant world. 1992 verdict of Federal Shariat Court (FSC 1992 10) Proved that Non-Muslims could not be awarded death penalty, showing the vagueness of concerned section. Infect, Precedent itself is a confused set of principles. Which makes blasphemy as “Ridah” (apostasy). Experts are of the contrary view here: witnesses required in “Hadd” (crimes and punishments prescribed in Quran) have not been given in this verdict. criticizing this law, many activists have been murdered or attacked. Showing the sense of intolerant and bigoted society. Salman Taseer, a sitting governor of the largest province of the country, was murdered in 2011 after his remarks came against blasphemy law. Since 1992, 62 persons have been extra-judicially murdered. It might surprise the readers that not a single accused has been convicted in court of law. Showing its consistence in its misuse for the benefits of some influential persons, who try to win their personal disputes. Not to mention the whole case of Asia Bibi, spent 9 years imprisoned just to get acquittal from supreme court. Recently, a university professor was arrested in “Sindh” on alleged blasphemous charges because of his personal quarrel with religious cleric.

Neither the Stories of fake blasphemy charges have ended, nor it will end. Only amendment and reformation of law, can put an end to losing precious lives.

Islamization of laws caused much effect on religious freedom, making the people more outrageous and sensitive. The process started 1973, later, in martial law regime put more fire on the matter. Let me reiterate for reformation and amendment of the laws that cause religious-based discrimination and hindrance in placing our land among the best religious freedom countries. Need for updating the curriculum to modern scientific-based principles and mind of the people, is equally important so that we can create a tolerant and inclusive society.

The writer is a member of Human Rights Commission of Pakistan, he tweet at @IAmFarmanAli

The views and opinions expressed in this article are those of the author and do not necessarily reflect the views of the organization.