ISLAMABAD: Panel of eminent politicians and former civil and military servants has asked that the Federal Government must start a grand Inter-Institutional Dialogue at the earliest during a virtual forum organized by PILDAT.

Speaking at the forum Senator Mushahid Hussain Sayed, Chair Senate Standing Committee on Foreign Affairs, Fawad Hasan Fawad, Former Secretary to Prime Minister of Pakistan, and General (Retd.) Ehsan-ul-Haq, Former Chairman Joint Chiefs of Staff Committee and Former DG ISI & MI, believed that the state of inter-institutional relations is such that a dialogue is imminently required. Prime Minister, the Federal Government and the Parliament must take immediate initiatives to plan for and hold such a dialogue for the future of Pakistan.

A dialogue is not required just between the civil and the military but among all State institutions including the Executive, Judiciary and the Parliament. However, such a dialogue can only be initiated by those in power and we have seen no concurrence from the Prime Minister in this regard, said Fawad Hasan Fawad. He said that Pakistan’s Constitution is very detailed-oriented and it has defined very well, together with Government of Pakistan Rules of Business, the contours and domains of institutions and their inter-institutional relations. The framers of the constitution did not envisage the need for an inter-institutional dialogue, he said. “Because our constitution is detailed and clearly defines every institution’s role. So they never imagined that such a situation will emerge where arbitration is needed.” A dialogue, has to be held within the confines of the Constitution and the National Security Committee (NSC) does not have a legal or Constitutional mandate to hold a dialogue. “A legislative forum is needed to hold a Grand National Dialogue, he concluded.

While we discuss the need to hold inter-institutional dialogue, we must keep in mind the painful historic perspective of dismemberment of Pakistan on December 16, 1971, said Gen. (Retd.) Ehsan-ul-Haq. In the past, Pakistan has experimented with many models of a National Security Council like body given our national security issues. The current NSC, despite its structure and secretariat, has not been made functional by the very party that created it, he said. In its current composition, NSC can not be the platform to hold a grand dialogue, he believed, unless opposition is represented on it. “Inter-Institutional Dialogue wont be an event, but a process,” he said, which must be held away from the gaze of media and public to avoid partisan grand-standing, he suggested.

While Inter-institutional dialogue is needed, the “NSC does not have the institutional gravitas to hold this dialogue,” believed Senator Mushahid Hussain Sayed. The forum for such a dialogue should be the Parliament and like before the Senate Committee on the Whole can provide the forum to initiate such a dialogue. He said that setting rules of the game should be the first priority of the dialogue and it was our collective failure as a nation that we could not set rules of the game that led to the debacle of East Pakistan. At the outset, therefore, military and intelligence agencies do not require to be part of the dialogue and later a core committee can engage with them, believed Senator sayed. “Pakistan is a changed, vibrant society. There are no more holy cows,” he said. “Power is a very ephemeral thing though each individual believes power can be held on.” It important to rise above the self and initiate a conversation for the future of Pakistan. Parliament has led before in times of crises and it can do so again. “Pakistan has the regional space at the moment to put its own house in order,” believed Senator Mushahid Hussain Sayed. 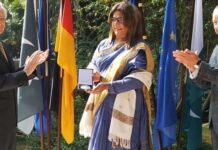 ABOUT US
Pakistan's first Youth-Centric Newspaper
Contact us: [email protected]thedayspring.com.pk
FOLLOW US
© The Dayspring Media 2018-2020 All Rights Reserved
MORE STORIES