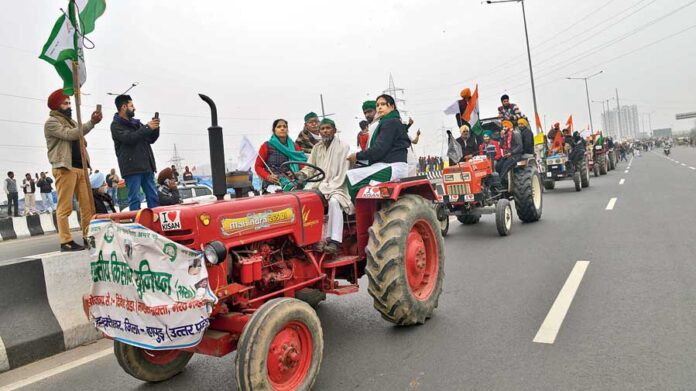 Shinning India is a slogan that must be changed to ‘atrocious India’ amidst the current situation. A regime led by Modi which has its hands stained with murdering, plundering and raping of innocents with countless videos on social media which requires viewers’ discretion.

The minorities in India have been through worse and the contentious Indian flag has innocent blood oozing out from its roots. The systematic genocide over the years have been deliberately downplayed by the local media but now in this age and time everything is now getting clear.

The secular face of India is no longer secular, it is biased and tyrannical and has deception and hypocrisy all engulfed in one package which is now no longer saleable.

The Tractor Rally from Sikhs in India gives a message to the world that all is not well in India. The severity and intensity of the event can be gauged from the fact that it was the Republic Day that was marred by the protests and wide spread tear gas shelling by the Indian forces. The hoisting of Khalistan Flag at the Red Fort (LalQilla) and throwing of the Indian flag (Tiranga) was watched by millions of viewers.

Khalistan, the dream of the Sikh community is finally taking a shape and thousands who protested against the Indian government have now given impetus to the numerous separatist movements, which are active in the length and breadth of the country.

The great Quaid Muhammad Ali Jinnah, founding father of the nation was right along with stalwarts like Sir Syed Ahmed Khan who, with their far sightedness, judged the Indian trap decades ago. All under single umbrella, the concept of Hindutva as the Hindustan is for the Hindus and every other in the Hindustan needs to be purged and accept Hinduism and there is no other choice.Amnesty International in its campaign ‘Halt the Hate’ has made India a flashing point in the world with extremism on the rise with each passing day.

The year 2015 alone saw the violent and extremist Hindu burning the sacred books of Sikhs in Faridkot and when the Sikh community protested over the desecration of their religious books they were shot at resulting in five dead and hundreds injured. Jalandhar, Ludhiana, Amritsar, Kot-Kapoor and many other Sikh community areas had their places of worship defiled. The Christian community also had a fair share of Hindu extremism; their conversion from Christianity to Hinduism has been a ritual that has mass gathering with swords and trident yielding Hindus.

The extremist Hindus since 2016 have changed the status of Kashmir and have revoked the article 370 which gives Kashmir as different status. It has been years now there is curfew imposed in the valley. This valley is no longer accessible to Indian parliaments themselves. Member Indian Parliament Rahul Gandhi was detained at the airport and denied entry in Kashmir.

The Sikh protestors have shown the way and now how long atrocious and tyrannical Modi regime can suppress the separatist movement only time will tell.