Death of Abrar Hussain Nekokara, SSP and principal of Police Training School Rawat, has left the people of Chiniot and particularly those of his village Harsa Shaikh in despair. In fact, Abrar Hussain was a man larger than life. His death has caused pain to thousands of people because he lived his life for others. I, being a friend of him, know that he believed in love and practised it without professing it. His deeds point to the fact that he dreamed bigger than his personal development. He turned his village into a model village. He ran tree plantation campaigns to contribute to combating climate change, built swimming pools to protect people from heatwaves and established playgrounds to encourage young people to adopt a healthy lifestyle and utilise their energies in socially acceptable ways. Moreover, he spent a major a part of his income from his inherited land for building brick houses for the poor and paying the fees of their children. He often used to say that, “To me it seems cruel that we live in lavish homes and our children go to elite schools while poor families live in mud houses and their children work as daily wagers when they are supposed to be in schools.” He believed that there needs to be individuals amongst us who try to compensate for the state’s failure to ensure a respectable life for those who fall on hard times.

His next goal, if he were alive, was to organise multiple local festivals where people from lower economic brackets might get an opportunity to exhibit and sale their handicrafts. Owing to these steps the people of Chiniot in general and those of Harsa Shaikh, in particular, are highly indebted to SSP Abrar Hussain Nekokara. One of his villager, overwhelmed by his gratitude to Abrar Hussain, said in a video clip gone viral on social media that, ” We were wanting in wisdom but Baba G ( his epithet for Abrar Hussain) taught us everything he had learned. We lived in oblivion before  he came to make our lives purposeful.” A saying goes that, “You die twice. One time when you stop breathing and a second time, a bit later on, when somebody says your name for the last time.” Abrar Hussain Nekukara deserves to never die twice. His second death would come if his vision of transforming the lives of the less privileged people of his area through education and generosity on the part of the privileged ones dies with his death. But if his mission continues a part of Abrar Hussain would also continue to live. In fact, grief over the death of a man who touched the lives of many in a positive way is natural but people of his area should also be thankful to Abrar Hussain that he was.

Though Abrar Hussain died young but he burnt so brightly before his death that his brightness would shine for all time. Abrar Hussain reportedly said that, ” A wise man takes his life only when he comes to understand the meaning of life.” One has every right to disagree with the late Abrar Hussain but it is also true that death is not the opposite of life but a part of it and there are things that death cannot touch. Abrar Hussain has died only physical death but the plants he planted have still to become trees, the children he enrolled have still to make names as big as was Abrar’s, and the seeds of love and hope he sowed have still to grow into flowers. Abrar would not be dead if the seeds he sowed become trees. The highest tribute to the dead is not grief but the fulfilment of the goals he gave his life to. And feelings of love and gratitude to late Abrar Hussain would resolve only if his philanthropic mission continues. 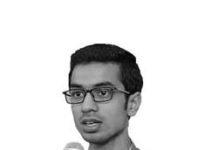