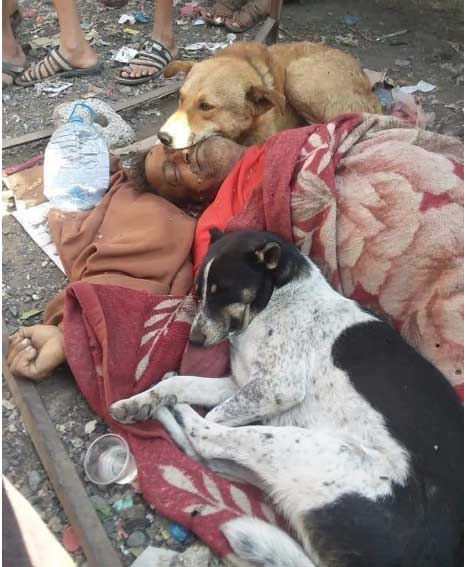 He is dead but has a smile on his face portraying peace that he is among friends and is cared for.

It is believed the man suffered a cardiac arrest and died in pain but his face has a grin as in his last moments he shares the affection of the loved ones who stood next to him.

It is not uncommon homeless the world over after getting kicked from the society find peace in the company of animals who have no malice towards them.

Love begets love, these animals have an abundance to share on reciprocal basis and bear no malice.

Homeless, alone and now dead, the man can have any name though identified as Ismail Muhammad Hadi. He died in Karachi one of the mega cities of the world hosting thousands of homeless on the streets.

The deceased has K-9 friends who mourn his death unlike humans as the bond they shared happens to be unconditional and without any motive.

The four legged K-9 all strays stay close to his dead and cold body, with one keeping him warm and second placing his head over his cold forehead to give warmth.

Nobody mourns the death of these people who are the leftovers of the society and live off the garbage thrown by the rich elite who pander the feelings of the poor.

It is believed the dead man shared his food with the stray dogs which huddled together with him during the cold nights giving warmth to each other as humanity as a whole have turned their backs on them.

They are the outcasts and are the ‘walking dead’ who roam the streets sans the desire for any worldly gains.