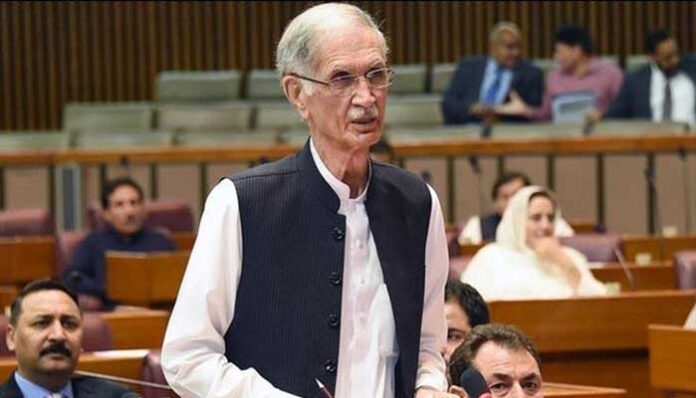 They are ignorant of the poor and their needs. What they say is far from reality and the recent one is another outburst from Defense Minister Pervez Khattak who blatantly refused to acknowledge the price hike and growing poverty in the country. His tirade came during the budget debate in the National assembly where he pushed the reality as a ping pong ball in the ‘opposition camp’.

“There is no poor in the country” honourable Defense Minister remark is like a slap on the face of the millions who are finding it difficult to survive the pandemic. The figures are huge as in the past there were very few sitting by the roadside but now in the pandemic, there are hundreds on the road side as the work has been scarce and there are hungry mouths to feed.

There was a lot more from the minister but the words as in ‘no poor in the country’ depict all as how serious these people representatives are towards the nation and particularly towards their constituencies.

Prime Minister Imran Khan on many and occasions have said there is inflation, price hike and very hard times but his ministers think otherwise.

It is high time these elected representatives should be given a crash course on international reports and they should get grooming lessons as how to act and behave on different occasions.

The hooliganism in the national assembly which is the august house a few days ago is still fresh and the documents that have a religious inscription written at the front page was thrown as a weapon on one another in the Islamic Republic of Pakistan. Should Prime Minister find time and witness the front page of the document himself he will know how these parliamentarians acted.

Throwing the documents with Quranic inscriptions, calls for desecration cases against all these hooligans who claim to be people’s representatives. They all stand together in the parliament and make debates as if nothing has happened.

Prime Minister Imran Khan who has displayed on many occasions his actions as a devout Muslim should look in to these hooligans again.

Now is the time the parliament must be purged from these ‘thugs’ who over the years have stolen the lives of many a millions.
Defense Minister is right, there is no poor in the country as all the corruption cases with billions stolen from the national exchequer is stashed with these parliamentarians who are hiding behind ‘rich lawyers’ who sadly see the money coming in and not the blood trail that oozes with it.

These so-called servants of the people fly in from abroad loot the national exchequer with shady deals and fly away on account of their dual nationality. The people holding Masters are forced to drive cabs in Pakistan while the people with fake degrees are flying the airplanes and people who act contrary to their stature are making the laws for which they are not even fit enough to sit.