Prioritizing Education is a key to Human Development, Experts 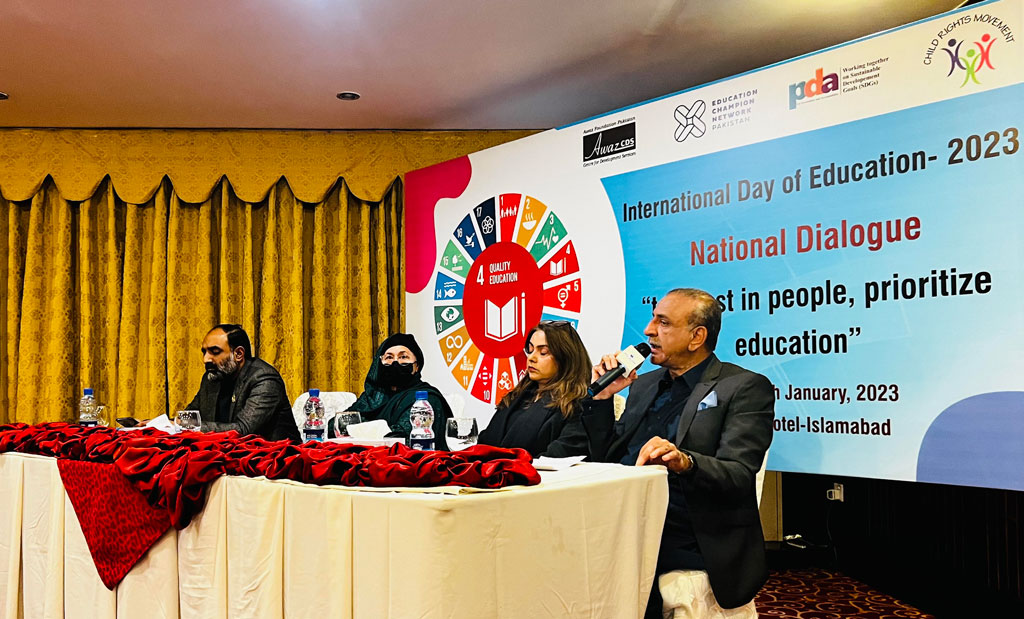 ISLAMABAD: On the International Day of Education, experts stressed on the need of prioritizing education especially in times of disasters so that learners are not deprived of their right to education and highlighted the role of political parties in ensuring quality education. These thoughts were expressed during a dialogue conducted by Awaz CDS and Child Rights Movement with the theme of “to invest in people, prioritize education”.

This event was an effort to bring awareness to the intricacies of issues in the Education sector according to Chief Executive Awaz CDS Mr. Zia ur Rehman, via panel discussions of both Development sector and government officials. He further said that the root cause of our education calamity is the lack of implementation of government policies already put in place, and once Pakistan succeeds in implementing the legislations and policies, progress and development is not far.

The first panel discussion was aimed to address the challenges of provision and obtainment of education in times of disaster in Pakistan. National Coordinator, Pakistan Coalition for Education Ms. Zehra Kaneez pointed out that even those who had educational resources such as schools, lost them instantly due to lack of disaster resistant measures and infrastructure hence there is a strong need to invest in disaster resilient systems and infrastructure.

Ms. Ayesha Khan, Country Director of Hashoo Foundation segued into the next panel discussion by concluding the first one and by reminding everyone the importance of public-private sector collaboration and reasserting the effective role of civil society to collectively address this nationwide educational disparity.

In the panel discussion on “Role of  Political Parties in Education”,  Zubair Safdar representing Jamat-e-Islami reiterated the issue of education governance and government schools. He said that government schools have great infrastructural resources but quality of education needs to be improved to gain parents trust.

Concluding the session Mr. zafarullah Khan Executive Director Vision 2047 said Political party representatives have influence over their supporters and policy makers in jointly bringing the necessary reform needed in our education sector. Political parties must realize their ability to affect systematic change and act accordingly. The event was closed with a productive and thought-provoking Question and Answer session. Ms. Aqsa Batool from Workers Welfare School Rawalpindi presenting the Charter of Demand on Education.