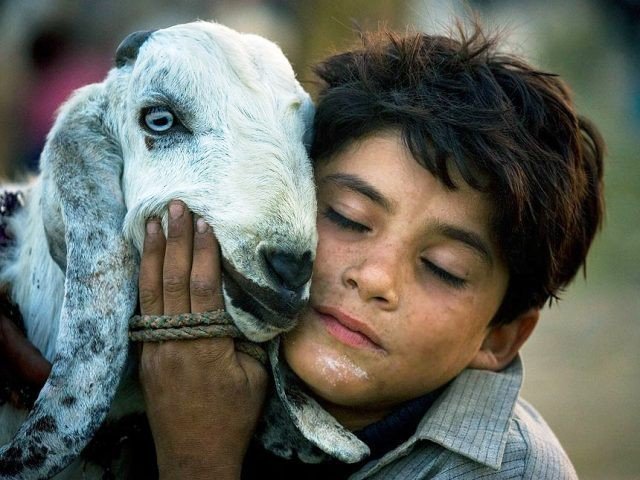 It is a common phenomenon especially among children who happen to be emotionally attached to the animals which they raised as pets.

The young boy is holding his arms around the baby goat and the love and affection he has for the small animal is evident from the facial expressions he conveys.

The pandemic has taken its toll globally and many families in order to make ends meet sell off their possessions.

Pakistan boasts of 70 percent population associated with agriculture and when pandemic added with uncontrollable inflation gripped the nation, many people sold their prized animals for dirt cheap prices for sustenance.

The profiteers again made the maximum as they had a (prey) in the form of a person who was in despair and any price was acceptable.
This year is no exception many families have accompanied their animals to the market to get a good price as Eid-ul-Adha is the event where the entire Muslim Ummah, who has the means make a sacrifice.

This religious event too is marred by the middle man whose antics have never been harnessed by the government and is considered the ‘most unreliable person’ in the entire scenario and hated at the same time for its cut throat tactics.

The government made many arrangements for the cattle merchants and asked them to follow protocols but on the ground, the situation tells otherwise.

The cattle markets, in particular, have been affected by the rain and there is little provision of water for the animals. The established animal sellers have taken the prized spots and in connivance, with administration, they are overcharging the consumers. What goes on is a big scam but the photographer has captured the moment between the child and the baby goat which depicts pure innocence and compassion.

The baby goat is still nursed on the milk but extreme and abject poverty has made the seller to sell both or one to any of the buyers who wants the sacrificial animal. This is a common story in almost all the villages where children and their pets nurture a special bond. The parents don’t object to the company as the two together are safe in one another’s a company and will not go far from the house.
The photographer has captured the moment where the trio is all uncertain of their future, very much like the future that looms over millions in Pakistan who survive on day to day basis.

People have not forgotten the goose sold from the Governor House Karachi, which were sent to market as they were deemed expensive and a burden on national exchequer. How many years they have spent in captivity in the Governor House and how they landed there, are questions which were never answered.

‘Sell them off’ was one order and they landed in the market and ended up on dinner plates.

Karachi one of the mega cities of the world has thousands of homeless and these homeless have no malice towards the world. With no friends and families it is the street that is their home and stray dogs and cats which form their family.

Ismail Muhammad Hadi was one such homeless who died in his sleep and his death was mourned by his four legged friends who nuzzled and snuggled around to keep him warm and never left him till he was taken away from municipality.

The small child who begged for money to buy milk for the kitten is also there as feeding the kitten was more important for him to feed himself. It was the care that made him forego his own need but he came for the kitten knowing very well that it is hungry and if it doesn’t get milk it may die.