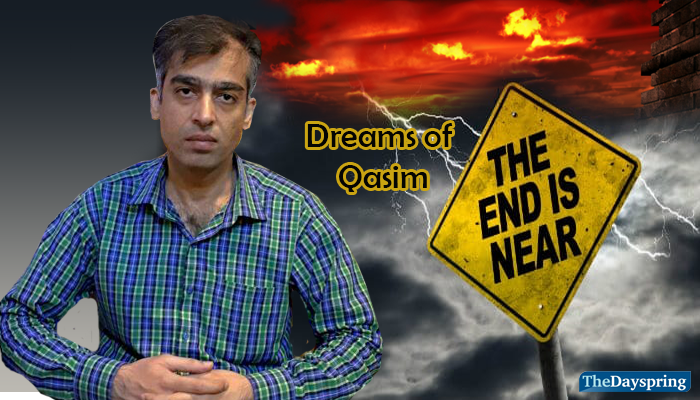 Allah SWT loves the mankind more than anyone else and He is most forgiving, most merciful. He doesn’t burden a soul more than it can bear because Al-Adl (The Just) is also one of His attributes. It is up to Him to bestow someone with goodness or a blessing by His mercy. Allah’s special mercy is also with a citizen of Lahore, Muhammad Qasim Ibn Abdul Karim who is 42 years old and for the last 28 years Allah and Prophet Muhammad PBUH are appearing in his dreams, and this same trait of his separates him from the rest of us. In particular the element of Tawheed (Monotheism) is most prominent and important in his dreams. Muhammad Qasim told us that the thing which takes precedence over other things in his dreams is to avoid shirk and this is the key to success. Muhammad Qasim has true love for Allah SWT and his last and final messenger, Muhammad PBUH.

Muhammad Qasim, who has had the honour of seeing Prophet Muhammad PBUH for more than 300 times in his dreams, he never had audacity to lift his head up and look into the blessed face of the Prophet PBUH however he explains that the experience is such as if there is a lot of Nur and I am standing there with respect and talking to him. He further said that he saw his first dream at the age of five and in that dream whilst climbing the stairs going up into the heavens from the roof of his house, he finally reached a point where he felt that these stairs will lead him straight to the Lord of the Worlds, Allah SWT. Muhammad Qasim further said that he was about twelve or thirteen years old when Allah and Muhammad PBUH appeared in his dream for the first time and then from the age of seventeen he has been consistently having such divine dreams. In 2014, for the first time Allah and Muhammad PBUH ordered me in a dream to share my dreams with everyone. He further added that since then he has shared his dreams to the websites of all the Islamic countries, the official and government websites in Pakistan.

Muhammad Qasim said that the first sign of his dreams is that the enemy will try to damage and break up Pakistan but Allah will protect Pakistan and Pakistan will also become a leader of the Islamic world. Pakistan will progress a lot and become a highly developed country, it will develop and manufacture everything on its own even the space shuttles, and such a system of good governance and social justice will be formed that not only the Muslims but even the non-Muslims from the rest of the world will also come and start living in Pakistan. Pakistan and its Army will play the central role in the rise of Islam. During his conversation whilst highlighting the Pak-India tensions Muhammad Qasim said that, in a dream on 20th March 2017 he saw an Indian conspiracy to paralyse the army of Pakistan. The enemy mixes some chemical in the food of Pakistan Army through which an attempt is made to paralyse the army. Then in a dream on 26th May 2018 it was clarified to Muhammad Qasim that this food is fuel and dollars because when there are no dollars then we wouldn’t be able to buy any fuel and if this happens then transportation in the country and the movement of the army will be affected. Muhammad Qasim further said that when the enemy starts advancing towards Pakistan, then the people of Pakistan also stand shoulder to shoulder with Pak-Army and he also finds himself in the front row to fight the enemies.

Muhammad Qasim further explained that the way Prophet Yusuf (AS) saved the kingdom of a non-believing Egyptian king and its people from the famine and calamity by interpreting his dream and made preparations for the future, similarly Pakistan will also have to prepare itself in the light of these divine dreams and he gave a message to the Army Chief of Pakistan to increase the number of troops to two folds. We need to provide maximum facilities to our Army and raise its standards so that we can meet any kind of challenges in the future. Whilst talking to us about the World War 3 Muhammad Qasim said that a huge destruction will spread in the Middle East during this war. As a result of this war between USA and Russia the battlefield will be the Arab countries. The people of the Middle East will migrate to Pakistan in search of peace and Pakistan will have to make arrangements to accommodate them and provide them food and shelter. In this meeting Muhammad Qasim repeatedly mentioned the Black Fighter Jets (BFJ) and how these Black Fighter Jets will defend the borders of Pakistan and the BFJ will be the most advanced aircraft of the world and they will be unbeatable. These BFJ will be a special mercy from Allah SWT and with their help we will also free Kashmir well before Ghazwah-e-Hind and India will be so scared of these Black Fighter Jets that it will not dare to attack Pakistan alone. Muhammad Qasim further explained that when these Black Fighter Jets (BFJ) jump into the Middle East to regain the lost territories of the Muslims then they will defeat both USA and Russia and there will be no one to stop them. Whilst talking to us about the End of Times events, Muhammad Qasim said that he has seen Dajjal many times in his dreams and also the Yajuj and Majuj when they unleash and attack. I have also seen Prophet Eesa (AS) in my dream and the fact that after his descent the Muslims start living with him. During his conversation the thing that Muhammad Qasim stressed upon most is to avoid shirk, and in this regard he mentioned that once we try and protect ourselves from shirk and its forms and run the affairs of the state according the commandments of Allah SWT and abolish shirk at the state level, then Allah will shower his blessings and mercy upon us He will provide us from where we can’t even imagine. But until shirk and its forms are completely eliminated Allah’s help will not arrive either and we will remain lost in the darkness and we will not progress. Just imagine this way that avoiding shirk is a key with which all those doors of progress and welfare will also be unlocked which we have failed to open so far. Once we abolish shirk at the state level then Pakistan will surpass the rest of the world in the field of science and technology and will become a real welfare state and the world will give examples of Pakistan’s progress and prosperity.

Muhammad Qasim explained that the reason he is stressing most on avoiding shirk is also due to the fact that the very first message that Allah SWT has sent through all the Prophets is to avoid shirk and remain firm on Tawheed (monotheism) and the last and final prophet of Allah, Prophet Muhammad PBUH also invited people towards Tawheed and told them to avoid shirk (Polytheism) and then went on to established a successful society. As a minor ummati of Muhammad PBUH we also need to follow his Sunnah and to establish a successful and welfare society shirk needs to be eliminated at the state level. The message that Muhammad Qasim gave to the Ummah from the depths of his heart is that if they want to succeed then do not associate any partners with Allah in His person and His attributes, glorify Allah SWT day and night by doing Dhikr of ‘SubhanAllahi Wabhihamdihi SubhanAllahil Azeem’, and send peace and blessings upon Muhammad PBUH all the times by reading Durood Shareef. During his conversation Muhammad Qasim also mentioned that when the news of his dreams reaches the top leadership, Prime Minister of Pakistan and the Army Chief, then Prophet Muhammad PBUH will give witness to them via a dream that Qasim’s dreams are true and they are from Allah SWT and things are going to happen as it has been shown to Qasim in his dreams. And then by the help of Allah we also defend Islam and Pakistan.